Cholesterol – The Truth Your Doctors get wrong

You are here: Home / Blog / Cholesterol – The Truth Your Doctors get wrong

Before we get to the TRUTH, let’s uncover the MYTHS…

MYTH #1: Cholesterol is “public enemy number one.” When there is too much cholesterol in your blood, it builds up in the walls of your arteries, causing a process called atherosclerosis. High cholesterol is one of the major risk factors leading to heart disease, heart attack, and stroke.

Can you handle the TRUTH? Buckle up!

Cholesterol itself (whether being transported by LDL or HDL) is exactly the same. Cholesterol is simply a necessary ingredient that is required to be regularly delivered around the body for the efficient healthy development, maintenance, and functioning of our cells. The difference is in the “transporters” (HDL and LDL).

The fact is that both HDL and LDL are essential for the human body’s delivery logistics to work effectively. Problems can occur, however, when the LDL particles are both tiny and their carrying capacity outweighs the transportation potential of available HDL, which can result in more cholesterol being transported around the body with diminished resources for returning excess capacity to the liver.

Some 25 million Americans take these so-called “wonder drugs” to lower their “bad” cholesterol levels, but is this popular class of pharmaceuticals actually safe? NOPE! There are over 900 studies proving the adverse effects of statin drugs, including anemia, chronic fatigue, acidosis, liver dysfunction, thyroid disruption, Parkinson’s, Alzheimer’s, diabetes, and … yes … even CANCER!

Far from a miracle cure for heart disease, statin drugs come with a laundry list of side effects. These statin drug side effects are often ignored or glossed over as rare or exceptionally unlikely.

Statin drugs, it turns out, are far riskier than you’ve likely been told. From a cancer risk perspective they’re one of the last drugs you’d ever want to take for improved quantity and quality of life.

There are two primary classes of cholesterol-lowering drugs currently on the market: fibrates and statins. Fibrates, which include drugs such as clofibrate (Atromid-S) and gemfibrozil (Lopid), represent what you might say was “phase one” of the pharmaceutical industry’s war on cholesterol.

Phase two is the statin class, which includes drugs such as atorvastatin calcium (Lipitor), pravastatin sodium (Pravachol), and simvastatin (Zocor).

Back up… What Exactly is Cholesterol?

Cholesterol is a waxy, fat-like substance that’s found in all the cells of our body. It has a hormone-like structure that behaves like a fat in that it is insoluble in water and in blood. Cholesterol travels through your bloodstream in small packages called “lipoproteins” which are made of lipids (fats) on the inside and proteins on the outside.

Cholesterol is also an essential component of cell membranes and, helps maintain the integrity of cell membrane fluidity (which is constantly changing due to fluctuations of dietary fat consumption).

Cholesterol also plays a particularly important function as a major constituent of the myelin sheath, which acts as insulation of neurons. It should be noted that cholesterol is so important to bodily functions that the cell membranes actually manufacturer it in direct response to the body’s demands.

Cholesterol plays a large role in the function of the immune system; low cholesterol levels may increase the risk of several types of cancer.

Cholesterol is actually secreted by glands in the skin which help protect the skin from infections from detrimental bacteria and fungi.

Cholesterol also acts as an antioxidant and possesses powerful antioxidantproperties.

Cholesterol is the precursor in the formation of all steroid hormones.

Cholesterol drugs, as revealed in a 1993 study published in the Journal of the American Medical Association, have been causally associated with an increased risk of non-cardiovascular health conditions. These are essentially any disease not related to the heart or blood vessels, as well and death. A team of researchers from the University of California, San Francisco (UCSF) determined that the intervention-based method of using fibrates and/or statins to lower cholesterol may be a misguided one that’s putting millions of people at risk.

What they found is that patients who lower their cholesterol levels by taking such drugs simultaneously increase their risk of developing other chronic health conditions such as cancer. This is significant because it reiterates the fact that lowering cholesterol with drugs isn’t the catch-call for increasing mortality that the medical system often claims it is. It also supports the notion that high cholesterol itself isn’t necessarily even a problem.

“This raises the possibility that one or more of the cholesterol interventions could have very serious adverse effects among young adults, whose risk of non-CHD death is normally 100 times their risk of CHD death.”

These same researchers published an editorial in the journal Circulation about a decade later that reiterates these findings. After examining data on the subject spanning at least 20 years, the team confirmed once again that artificially lowering cholesterol using statins and/or fibrates comes with serious health risks. They found that the risk of the drugs far outpace the alleged “risks” of high cholesterol.

As a matter of fact, a recent study published in the March 2015 journal Expert Review of Clinical Pharmacologyindicated that statin drugs inhibit the biosynthesis of selenium containing proteins, one of which is glutathione peroxidase, which serves to suppress peroxidative stress. An impairment of selenoprotein biosynthesis may be a factor in congestive heart failure, reminiscent of the dilated cardiomyopathies seen with selenium deficiency. Thus, the epidemic of heart failure and atherosclerosis that plagues the modern world may paradoxically be aggravated and evencaused by the pervasive use of statin drugs!

Another paper published in the British Medical Journal’s The Lancet in 2002 demonstrated further the increased cancer risk associated with Pravachol (pravastatin). Pravachol is one of the leading statin drugs that the American Heart Association (AHA) and the American College of Cardiology are now urging healthy men and women to take for “prevention” purposes!

Though the drug demonstrably lowered low-density lipoprotein (LDL) cholesterol levels in patients by about 34%, new cancer diagnoses “were more frequent on pravastatin than on placebo.” In other words, pravastatin might lower your “bad” cholesterol (which really isn’t bad at all), but there’s a pretty good chance you’ll develop cancer instead!

In case you aren’t aware, cholesterol is actually a good thing for your body, and is something your body makes naturally.Think of cholesterol as a nutrient rather than a poison. It is both fuel for your brain and one of the primary building blocks for healthy hormone production. The same is true for cancer prevention, with at least nine separate studies confirming that cholesterol is a necessary component in bodily homeostasis for cancer prevention.

A recent 2015 review published in the journal QJM: An International Journal of Medicine further challenges the prevailing myth that cholesterol is an evil to be reckoned with. The study showed that not only does cholesterol help protect against cancer, but not having enough can drastically increase one’s cancer risk. 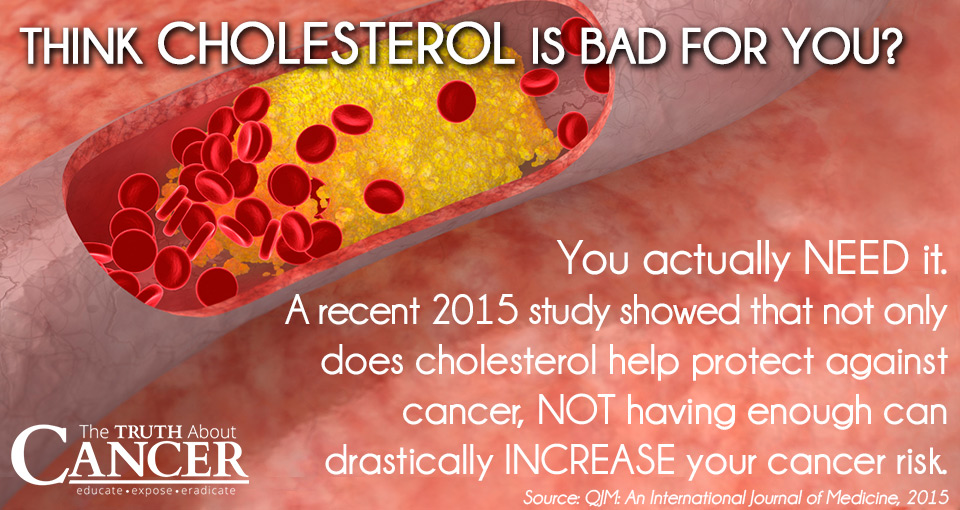 One large-scale cohort study in which more than 47,000 patients were given between 5 and 10 milligrams of simvastatin (Zocor) daily showed convincing results. The study revealed a threefold increase in cancer mortality among patients whose cholesterol levels had dropped below 160 mg/dL as a result of taking the statin drug.

Statin drugs have also been shown to be inherently carcinogenic in mice. A 2012 research project illustrated an inverse relationship between the drugs’ cholesterol-lowering effects and incidences of cancer. Even the World Health Organization (WHO) came to the conclusion that one of the adverse effects of the cholesterol-lowering drug clofibrate (Atromid-S) is, in fact, cancer.

“When searching PubMed with the words ‘cancer AND cholesterol’ we identified nine cohort studies including more than 140,000 individuals, where cancer was inversely associated with cholesterol measured 10-30 years earlier, and where the association persisted after exclusion of cancer cases appearing during the first four years,” the authors wrote.

For Your Health, Skip the Statin Drugs

Cancer can take many years to develop following its initial triggers. Therefore, industry studies that appear to support the safe and effective use of statins aren’t credible in terms of their cancer risk assessment. This is because they fail to take into account the 10-30 year cancer growth period that, according to the findings of the aforementioned study, are the lynch-pin of the statin drug-cancer association.

For the vast majority of people (I would content ALL people), statin drugs are just bad medicine. Given the sizable body of scientific evidence now suggesting that having low cholesterol and taking cholesterol-lowering drugs like statins and fibrates both contribute to the formation of cancer, there’s simply no good reason to take this unnecessary risk with your long-term health.

Concerning the alleged heart risks associated with high cholesterol, Dr. Jeffrey Dach, MD, agrees that coronary heart disease is indeed a product of poor diet and unhealthy lifestyle. It is not necessarily cholesterol that is the problem. It’s a glut of heavily-processed carbohydrates, refined sugar, and other chemical-ridden foods that cause arterial damage which the body calls on cholesterol to fix! These foods also happen to be among the leading causes of cancer, which means they should be avoided at all costs.

But Dr. Dach is not the only one with this position. According to recent research at Harvard, the primary causes of atherosclerosis (hardening of the arteries which leads to heart disease) are lesions and plaque in the arteries caused bysugar which causes insulin to be released. Insulin causes lesions in the endothelium of the arteries that become clogged with cholesterol. So, cholesterol gets the blame, but the real culprit is sugar. So, if you avoid sugar and simple carbs, cholesterol is not an issue.

As I mentioned above, cholesterol is essential to support cognition, fuel hormone production, and protect against chronic disease, including cancer. These beneficial tasks are what cholesterol is supposed to do.

Dr. Uffe Ravnskov, MD, PhD, one of the authors of the previously mentioned study, discusses this at length in his richly-cited book Fat and Cholesterol are Good for You. He demonstrates with extensive scientific backing how cholesterol increases longevity, boosts immunity, and protects against cancer. As a matter of fact, the populations across the world with the highest longevity have also have the highest levels of cholesterol.

Not exactly what we hear on the nightly news, is it?

Please share this important information with friends and family. It could save someone’s life!

Mother Nature Is a Bitch