Metal Fillings in Your Mouth Could Make You Really Sick

You are here: Home / Uncategorized / Metal Fillings in Your Mouth Could Make You Really Sick

The dangers of amalgam fillings, which are composed of about 50 percent mercury, are becoming widely known. Even conventional news outlets, like NBC affiliate WCNC News in Charlotte, are featuring stories with headlines reading “Metal fillings in your teeth could make you sick.”

This would have been controversial even a few years back, and although health agencies like the US Food and Drug Administration (FDA) and the American Dental Association (ADA) still remain staunch advocates of dental amalgams, the evidence is quickly being stacked against them.

US FDA Is Long Overdue in Addressing Mercury Fillings

For more than 30 years, the US FDA has simply refused to issue any public warning about dental amalgam’s neurotoxic risks. In 2009, the FDA actually declared it safe under Class 2 for adults and children over the age of 6 who are not allergic to mercury.

This irrational declaration occurred despite the overwhelming evidence showing mercury to be highly toxic and easily released in the form of vapor each time you eat, drink, brush your teeth, or otherwise stimulate your teeth.

These mercury vapors readily pass through cell membranes, across your blood-brain barrier, and into your central nervous system, where it can cause psychological, neurological, and immunological problems.

Children and fetuses, whose brains are still developing, are clearly most at risk, but anyone can be impacted, and the health risks increase the longer you have your fillings.

Many hoped that the FDA would reconsider this foolish stance after the World Health Organization called for the phasing-out of amalgam in their 2011 report: “Future Use of Materials for Dental Restoration.”

In May 2011, the Council of Europe also issued a proclamation calling for restrictions and prohibitions of mercury fillings, which are already banned in Norway, Sweden, and Denmark. Health Canada also stopped endorsing amalgam for use in children, pregnant women, and people with impaired kidney function, all the way back in 1996!

On September 22, 2011, Dr. Jeff Shuren, director of the Center for Devices & Radiological Health (the branch of the FDA responsible for the approval and safety of all medical devices) promised to make an announcement on amalgam by the end of 2011. When questioned by a reporter at a major newspaper, the FDA repeated that it would act in 2011.

As 2011 came to a close, the suspense grew as everyone speculated whether FDA would finally act, to protect the health of American children. With just six minutes left in the work year, at 4:54 pm on Friday, December 30, FDA conceded that no announcement was forthcoming – not in 2011, and maybe not at all.

In 2013, the international treaty, named the United Nations Minamata Convention on Mercury, was passed, which requires the phasing out of many mercury-containing products, including thermometers, by 2020, and also calls for an end to all mercury mining within 15 years. The treaty takes effect only after its ratification by 50 nations, which can take three or four years.

Even after the treaty was passed, instead of working for the phase-down and ultimate phase-out of amalgam use, FDA and the ADA are pushing stalling tactics, saying that before phasing out amalgam we should go through a litany of diversions like (1) prevention of tooth decay, (2) research and mercury inventories, and (3) mercury waste management.

None of these actually phase down amalgam use, as required by the Minamata Convention. These stalling tactics can appear attractive at first glance. But don’t be fooled by the World Dental Federation: all three of their “amalgam phase-down measures” are designed to delay the demise of mercury fillings.

We simply do not need any additional research before we take action. There are many effective, affordable, and available mercury-free alternatives that have already been researched for over half a century.

The International Academy of Oral Medicine & Toxicology (IAOMT), along with several other groups, recently filed suit against the FDA, seeking an order to require a response to 2009 petitions that called for a formal ban on dental amalgam or its placement in the Class 3 device category. The latter would require:

Griffin Cole, DDS, president of the IAOMT, stated in a press release:1

“We have banned mercury in disinfectants, thermometers, and many other consumer products… There is no magic formula that makes mercury safe when it’s put into our mouths. It’s inexcusable to use mercury in dental fillings when there are much safer alternatives.”

Meanwhile, attorney James M. Love, who filed the lawsuit, pointed out that the FDA’s lack of regulation is allowing the ADA to continue to mislead the public:2

“The ADA has misrepresented FDA’s lack of regulation as proof of safety, and continues to use this toxic dental filling, despite scientifically demonstrated risks…

Most individuals remain unaware that those ‘silver’ fillings, prevalently used as a dental restoration and covered by insurance policies, consist of 45-55% metallic mercury, and that there are health and environmental risks associated with those fillings.”

As the world rallies around the obvious necessity of replacing mercury-based products with non-toxic alternatives, the ADA continues to shill for mercury fillings — heedless of dentist-members who have rejected amalgam and aware that taxpayers must pay the price for the pollution caused by pro-mercury dentists.

Perhaps their staunch opposition, even as facts are now impossible to deny, has to do with their massive conflicts of interests. The ADA is a former patent-holder of amalgam, and has helped draft woefully misled policy statements affirming that dental amalgam is “safe” and its contribution to environmental mercury contamination “minimal.”

The ADA has also historically covered up the fact that the term “silver filling” is profoundly deceptive, as the composite material contains anywhere from 49 to 54 percent mercury, thus should be called mercury fillings not the euphemistic and deceptive term silver filling. At one time, they even declared that removing mercury fillings is unethical and many dentists lost their licenses for removing them.

Last year, following an episode of the Dr. Oz Show that detailed the dangers of mercury amalgam fillings, the ADA even announced they had ended their affiliation with Sharecare, a consumer website co-founded by Dr. Oz. This wasn’t surprising, considering the ADA also aided and abetted dental boards to yank licenses from dentists who truthfully told patients that amalgam is mainly mercury and who advised against its use.

This was despite the known fact that dental amalgam emits mercury vapor after it is implanted in your mouth, and this mercury bioaccumulates in the tissues of your body, endangering your health in too many ways to count.

How Are You Exposed to Mercury Via Amalgam Fillings?

if you have amalgam fillings, then every time you eat, chew, visit the dentist, or drink hot coffee, mercury vapors are released into your oral cavity, where it can be absorbed into your bloodstream. The poisonous vapors are odorless, colorless, and tasteless however, so you won’t be able to tell that they’re there.

Many are unaware that dental mercury is a danger to dental practitioners, patients, and the environment. In fact, in the US, dentist offices are the largest source of mercury in wastewater entering publicly owned treatment works. Once there, dental mercury converts to methylmercury, a highly toxic form of mercury known to be hazardous to brain and nervous system function, particularly in fetuses and young children. Mercury is extremely dangerous once in the air, water, and soil — levels gradually increase over time, as it accumulates. It’s no wonder then that contaminated fish and other seafood are the largest dietary source of mercury in the US, courtesy of polluted waterways.

Several studies show that about 50 percent of the mercury entering municipal wastewater treatment plants can be traced back to dental amalgam waste. This mercury waste amounts to about 3.7 TONS each year! An estimated 90 percent is captured by the treatment plants generally via sewage sludge4 — some of which ends up in landfills, while other portions are incinerated (thereby polluting the air) or applied as agricultural fertilizer (polluting your food), or seep into waterways (polluting fish and wildlife).

In 2010, the US Environmental Protection Agency (EPA) announced it would create a rule requiring dentists who use dental amalgam to at least use best-management practices and install amalgam separators. An amalgam separator is a wastewater treatment device installed at the source, in the dental office, that can remove 95-99 percent of the mercury in the wastewater. As originally proposed, EPA said the regulation would be finalized by 2012. Unfortunately, the EPA is on the verge of withdrawing the rule that would order dentists to buy amalgam separators. The costs – and health risks –that ensue will be passed on to American taxpayers and families. 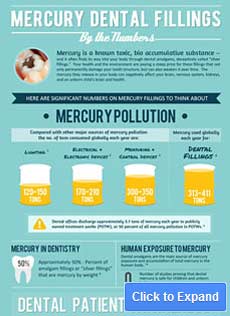 Do You Have Mercury Fillings You Want Removed?

For those of you who have mercury fillings, I recommend that you have them removed… but avoid making the mistake I did by having it done by a non-biological dentist. When you have these fillings removed, you can be exposed to significant amounts of mercury vapors if the dentist doesn’t know what he or she is doing. It’s also for this reason that I strongly suggest you get healthy BEFORE having your fillings removed, as you want your detoxification mechanisms optimized prior to removal.

My struggles with my own teeth led me to learn about and embrace biological dentistry, also known as holistic or environmental dentistry. In a nutshell, biological dentistry views your teeth and gums as an integrated part of your entire body, and any medical treatments performed takes this fact into account. The primary aim of holistic dentistry is to resolve your dental problems while working in harmony with the rest of your body. Biological dentists are well aware of the dangers involved with toxic materials such as mercury fillings (aka amalgams). Some things that need to be done to keep you (and your dentist) safe during amalgam removal include:

Keep in mind, too, that if you need a filling, there are many alternatives to amalgam. One of the most popular alternatives is resin composite, which is made of a type of plastic reinforced with powdered glass. It is already common throughout the US and the rest of the developed world, offering notable improvements over amalgam, as it: